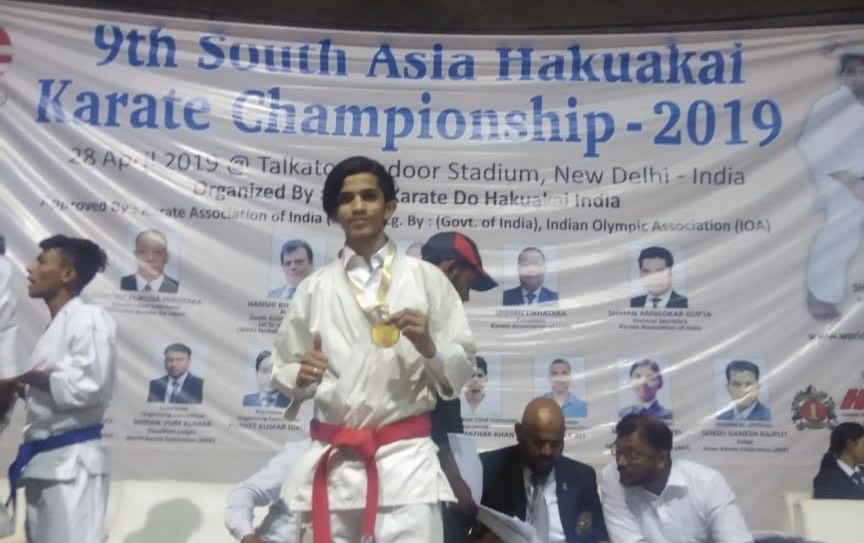 Syed Mohammed HussainRepresent INDIA Age 16 & -22 60 Kg Weight Category in Kumite Event-Elite he Won the 1st Place in South Asian karate championship 27- 28 April  2019 at New Delhi The first person from Hyderabad who got the this Position ever.On that Championship 7 Countries have been Witnessed.We wish him all the best for his future endeavors.Hussain  beat Nepal  Demie-5-0 in the men’s over 45kg-48kg category to clinch gold on his South Asian  games debut

Hussain who won the gold medal on his South Asian  championships debut at in the 45kg-48kg (minimum weight) category by beating the home favourite Nepal with a score of 0-5 in his  favour, made sure that he punched his  way through to make the Indian crowd celebrate in glory.

The 17 year-old gold medallist, Hussain who shined in gold at his  very first South Asian shared the thought process he  had prior to the match and also expressed his feeling post the win. He said, “My aim was to play my game with full focus and was to play for gold only. I was very confident even before my bout that I had to fight for gold only and give my 100% in the game.”

Having started as a 12-year-old, the karateka faced a lot of difficulties in his journey but that did not stop him from being the best version of himself  as he believes that those difficulties have made him stronger.

Hussain  also talked about his   journey till the final. he said, “All my opponents were very strong but I wanted to take a lead in two minutes of every round. We also had a camp here15 days before the fight started and I had a few training bouts with them which helped me plan my game against each of the players.”

he entered the ring each time with a golden target set in his mind and that mindset benefitted him  in performing well. He  said, “I did what I had in my mind and I got what I wanted. I will continue to train myself this way, that is to stay focused in the game and give my 100% while performing.”