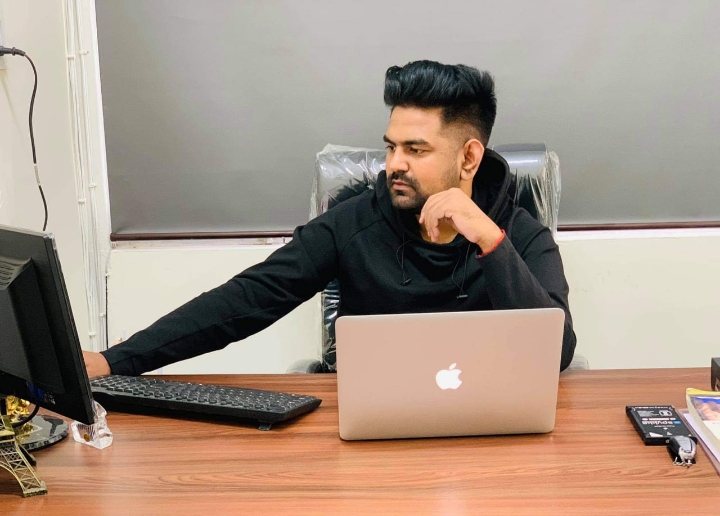 Pardeep Singh was born and brought up in Chandigarh and belongs to a middle-class family. He states that his father has been his role model and inspiration as he went the extra mile to provide good education and a great life to both him and his younger sister.

A self-made man like him has always gone beyond barriers to achieve his goals and has a motto of never backing down in life no matter what. He has not just been successful in changing his own life but has changed the lives of over 500 people.

Today, he is a multi-talented male entrepreneur in India with experience in travel management, social media management, Digital marketing, ticket management, photography, immigration, education, writing, and numerous other things, making him a jack of all trades. Even after gaining immense popularity, he takes criticism and negativity to survive the storms, is humble at the good times and calms at the unfavourable one’s. As an individual, he does not get affected by other’s progress instead celebrates their growth and takes inspiration from them. He dislikes people who keep on complaining about what they don’t have. Rather, he has an attitude of working hard every day to convince himself that he deserves whatever he has achieved. Along with believing in karma and destiny, which gives him the confidence to follow his heart, he constantly focuses on growing, developing and motivating others. As a child, he frequently skipped classes and was an average student yet never failed to inspire people around him by capturing and reaching. After getting graduated, he was unequivocal that he wanted to go to New Zealand for MBA, all the paperwork was done, and everything was ready in front of him until one night when he suddenly decided to drop that plan and took the call to pursue a master in aviation from India itself. With the help of his creativity, critical thinking, problem solving and communication, he was a travel manager of an MNC in no time. After having multiple heartbreaks from both friendship and relationship, he was in agony. Everything that he was doing in his life was towards his job, executing on it and making sure that he was good at it, except he could sense that something was missing and left his job to explore his capabilities. He was, nonetheless, eager to learn and had an ambition of starting his own business. For approximately a year, he was under depression, traumatized and completely devastated, clueless, with no plan in mind. Still, somewhere deep down, he knew that one day he would conquer the entire world with his constant efforts and hard work. He decided to contribute all his time to devotion and meditation. After gathering all the courage, he decided to get back in the game and started creating opportunities instead of waiting for one, and he had the confidence to grab whatever came in his way. Wasting no time at all, he took a big risk, began his own immigration company and merged the skills that he had developed. Very shortly, his creativity was on a whole new level, and he had some valuable insights gained while pursuing his hobby of travelling to his best business idea. At the back of his mind, he knew that only persistent diligence and restlessness would bring success to him. Perceiving that social entrepreneurship will change the world one day and give a new life to a dead business, he took action when others hesitated. What makes him different from others is that even after being an owner of a prosperous company, he is very down to earth and never claims to call himself an entrepreneur. It is his humble approach that reflects his meteoric rise to business. From the initial stage till now, he has never been seen living a comfortable life. He has always disowned his sleep, food, relaxation. If truth be told, during the prime years of establishing his company, he hardly slept and has never taken a day off. Undoubtedly all these sleepless nights paid off, and he proved him a renowned gem in the ocean of business who is addicted to success and hustle. While emphasizing the value of giving back to the community and helping those who need assistance, he says that he has been giving money to charitable causes for a long time. Apart from his fieldwork, he keeps an interest in investments like crypto and suggests his near and dear ones do the same. In the end, he quotes that “luck plays a part in success, but the harder an individual works, the luckier they get” He worked tirelessly to get his name out there and remains an inspiration for many other people belonging from a middle-class family.