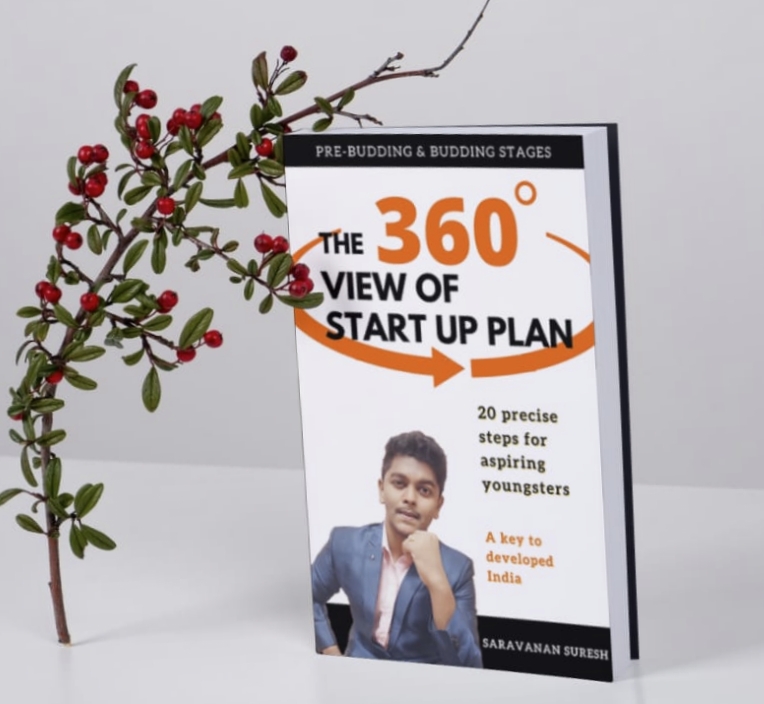 Meet Saravanan Suresh from Chennai, an Industrialist, Educationist, TEDx Speaker and Software Engineer who has recently launched his debut book “The 360 degree view of start up plan” in order to guide the aspiring engineering graduates to come up with their own start up and enhance their entrepreneurship abilities. He has listed 20 precise steps for coming up with a start up plan and the ways to monetise their start up idea into reality.

He says, “A successful business doesn’t require a great idea. All it requires is an idea with a great implementation.” He along with his father, co-founded “Vector Solutions.” It is an electrical firm which deals with large scale electrical Turnkey projects in South India. With just 3 members during the year of inception, the firm has grown to 30 plus members with projects in various states of South India. He looks for ways to improvise his organisation and employ a team of 100 plus people with additional branches of his organisation being set up in other cities within a span of next 5 years.

Just being 25 years of age, he is in a process of continuous learning from experts of his field and believes that one can succeed only from the experience of others and there’s always a lot to learn from people around us. The young Educationist is also a key note speaker to various colleges and schools including VIT University, KPR institute of Engineering and Technology, Chennai institute of technology, Alpha Arts and Science college, Velammal group of schools, DAV group of schools, etc. He manages to spare his free hour by guiding his fellow graduates to shape their career during weekends. He was also honoured with Best Teacher Award by lions club international Chennai for making online education accessible to rural areas in Sholavaram during the Covid pandemic.

When asked about his secret Mantra to success, he says, “just ignore negativity”. He believes that yoga and meditation can be really helpful to maintain the emotional stability and decision making process during the difficult twists in life.

On questioning about his early success, he says, “Age cannot be the basis for one to succeed in life. There are people much younger than me who are doing wonders beyond their age”.  He added, “Never look for perfection in any task because nothing can be 100 percent perfect”.

He opened up about his college life where he excelled with good scores and also his journey as a research student helping his professor to publish 3 journal papers which laid the basis for him to publish a book today. He went through a lot of doubtful questions from his peers and relatives when he decided not to sit for college placements in spite of having high grades. He was stubborn to devote himself to his start up organisation and help his father during the initial stages of their start up. He also said that people around him were doubtful about his decision and that’s when he decided to firmly believe in his ability to rise up beyond their criticisms.

His industry faced a huge crisis during the covid pandemic and order flows dropped to zero. The recovery from such a downfall was really a hard time for his start up. His only concern during the pandemic was to make sure his fellow employees in his start up are financially stable to manage the medical expenses of their family. He has written a separate topic about “employee satisfaction” in his book and he believes no organisation can scale up in their business with unsatisfied employees. He makes his final comment by saying “No matter what, to succeed in life, just act deaf to negative people and focus on your goals – the universe will respond to your aspirations.”