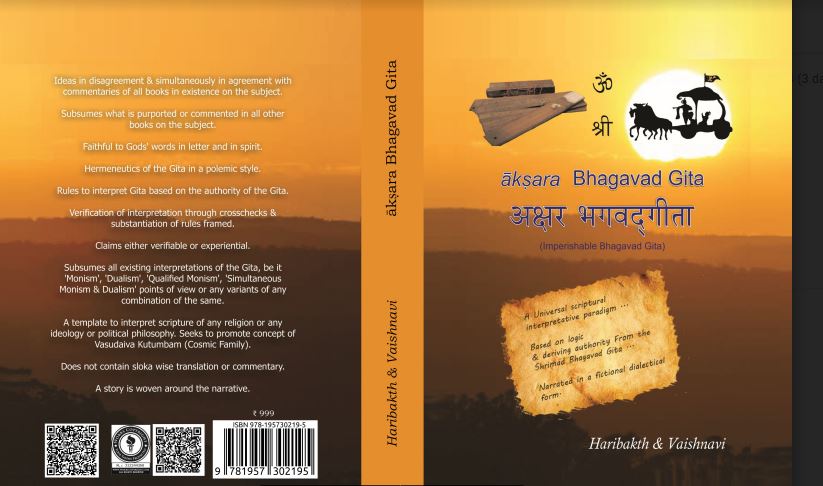 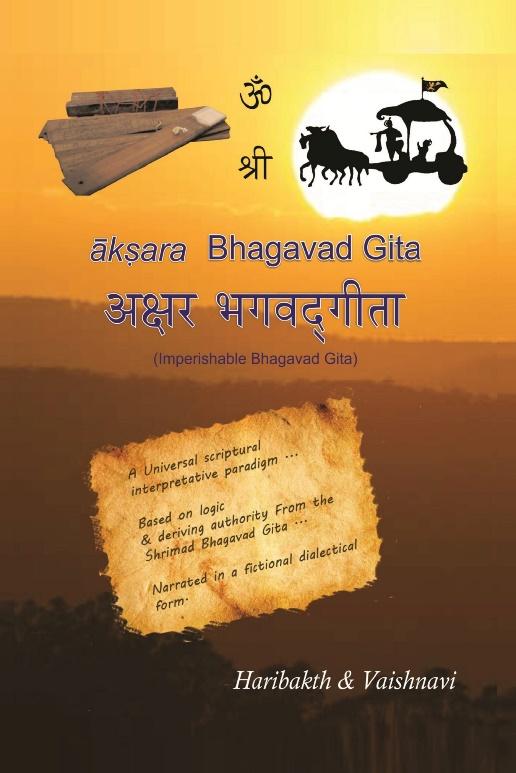 Aksara Bhagavad Gita, a  book that rewrites rules of interpretation of any scripture based on the Gita and in sync with contemporary branches of knowledge such as science, management, law, and Logic.

It is an analysis of the Bhagavad Gita. It enunciates and codifies the interpretative principles and application. It substantiates it by proposing a conceptual paradigm, creating a blazing trail for Hermeneuticians, academicians, and theologians to reflect by deviating from the semantic and syntactical model espoused by all the proponents and commentators thus far.

The story opens with a press conference, wherein the main protagonist, Haripriya, breaks down in ecstasy after fulfilling her father’s ambition by the main character, Christina. This is followed by the second chapter titled “Parthasarathy’s letter to his daughter”, which summarises the concept behind the book. The next chapter, “Jury appointment”, is an invitation by the author to the readers in particular and believers at large through the character of Justice Parthasarathy to analyze and evaluate the arguments in favour and against the concepts espoused by Haripriya.

The arguments for and against and the unfolding of the hitherto unexplored parts of the Gita from the Gist of BOOK II. The names of the chapters by themselves indicate the topic debated in Book II. The eighteen original issues and subsequent subsidiary issues cropping up during arguments are discussed in Book II and have been labelled parameters. Book II begins with an argument between student groups as to whose version of the Gita is correct and bonafide. A Moot court is convened wherein the unorthodox perspective of the author is presented through the character Haripriya. All theories and ideas put forth by her are contested and debated, during the course of which new issues crop up, which to is debated. This very debate is what the reader is asked to judge in the third chapter. The readers are invited to judge the presentation of the author through the character Haripriya. Couched within the underlying invitation is the call to the rational and logical side of humanity to see through the subterfuge of any ism and its confinement to a single ism contrary to God’s wisdom. It invites readers to evaluate God’s words for what they are, infinite, infallible, complete, omniscient, and omnipotent. To reveal this truth, blind beliefs and dogmatism need to be unveiled. To unveil, the author presents and introduces the concept of parameters. Parameters are nothing but criteria for the evaluation of truth. These criteria are identified and selected from the slokas of the Gita or derived from the Gita slokas. They form the cornerstone of the philosophy the author is trying to propagate. Each chapter introduces a new parameter, and the underlying principles therein are enunciated. In chapters numbered seventeen and eighteen, the very concept of parameters, their types, their roles, effects of using parameters, and non-usage of parameters are discussed.

These have been evaluated in light of acceptable contemporary branches of knowledge like Law, Science, Grammar, etc., to erase the label “Mythology”, Superstition”, “Dogma”, “Sectarian”, etc.

Chapter Thirty, “Wiki Style summary”, summarises the entire book. Chapter thirty-one answers common misconceptions a seeker has. Chapter thirty-two describes the Dwarka and Kurukshetra and the holy places associated in addition to them, along with their Vedic historical importance. Chapter Thirty-Three delivers the verdict. The verdict is unconventional, and the process that goes into delivering the verdict is both unorthodox and traumatic. It also brings forth the Value-based and ethics-based foundation our education has. Book IV has eleven illustrations.

Coverage is found to be extensive. All claims made are substantiated either with incidents /case-study from Vedic history, quote in Gita or correlated with real-life experience.

The presentation form and style are original. The contents are more original than the word original itself. It is unique, as can be observed from the fact that such a proposition is being put for the first time in the history of Gita or literature. The style of story in story and dialogue format appears to be a homage to the Lord by imitating His style.

The book could have been trimmed off non-essentials and reduced by 100+ pages from a literary-critical perspective.

From the domain perspective, what is adduced is challenging to evaluate as it doesn’t conform to any existing view/ideology/philosophy. It appears logical and pragmatic. It is both conformist and non-conformist simultaneously. Whether it is acceptable to readers, adherents, practitioners, etc., is a gamble in the future. Acceptance or otherwise apart, it has presented truth in a multi-dimensional way. Ultimately, the debate doesn’t die, for the matter is subjective and capable of being interpreted in “N” in a number of ways.

The effect of the book and its ramifications are manifold.

It integrates Dwaita, Adwaita, Visisht Dwaita, and all their variant perspectives at the lower level. It could open up new vistas for Hermeneuticians to explore at a higher level. It could also kindle interest in Gita researchers in pursuing the unexplored open ends. It also brings all religionists to a common platform with a common evaluation Model. It could revolutionize how we interpret scriptures. It would force academicians to rewrite books on hermeneutics. It would shift the focus of hermeneutics from the traditional western model based on the Bible to the Eastern & Indian model based on the Bhagavad Gita.